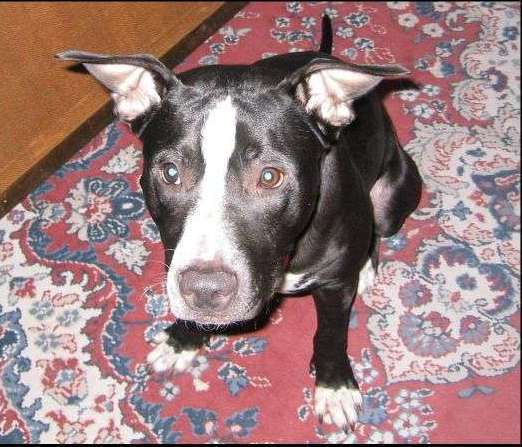 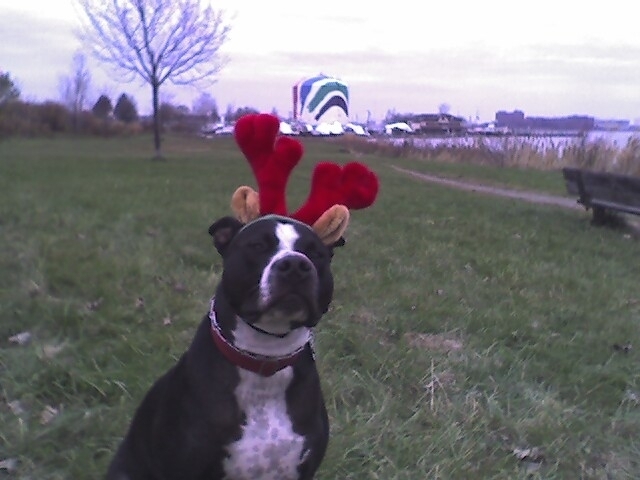 It may be time I just give up and move into the guest room. 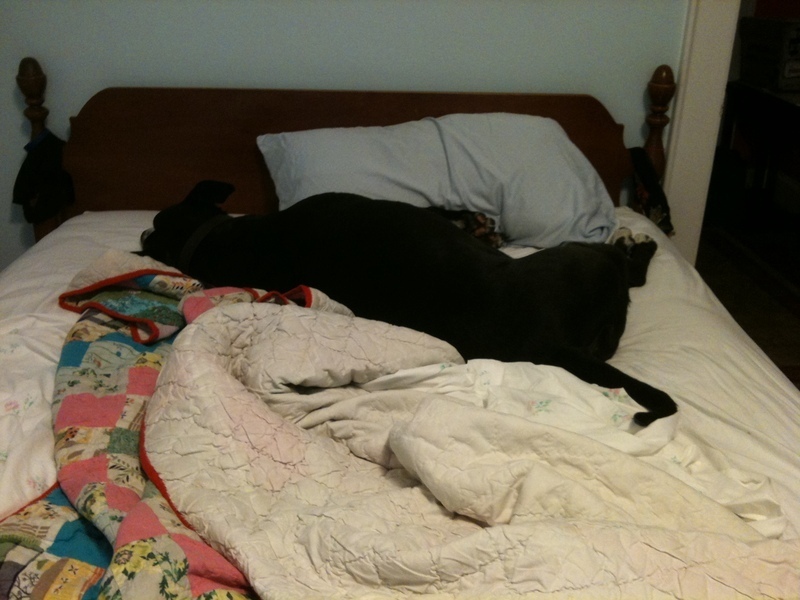 The first thing I saw upon arriving home today. 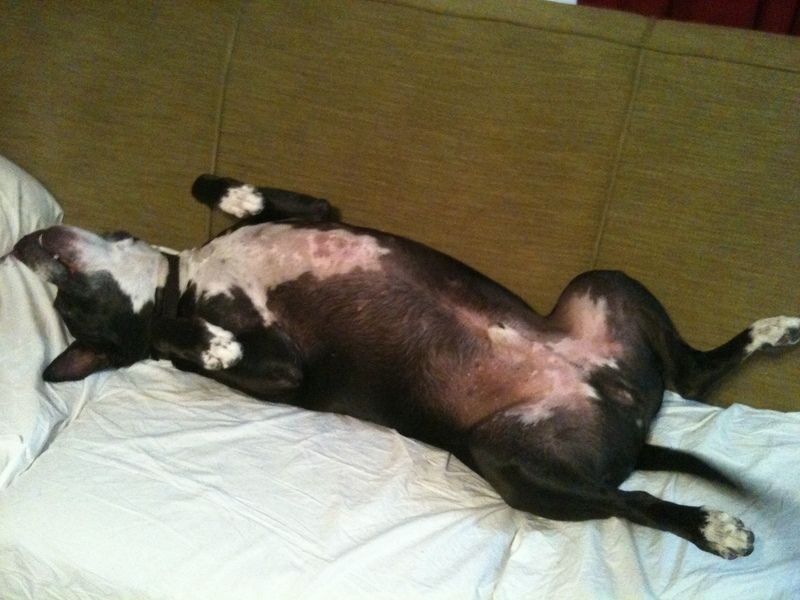 Yesterday, at the park, seven girls, maybe 10 or 11 years old approached and asked if they could say hi to Charlie. They formed a semi-circle, and with fourteen hands, petted the little beast. He moved in a circle, kissing each one in succession. Completing the circle, he turned back to me, sat, and looked up, as if to say, "it's cookie time." Yes, Charlie Ashmont, for that performance, you definitely earned a cookie. 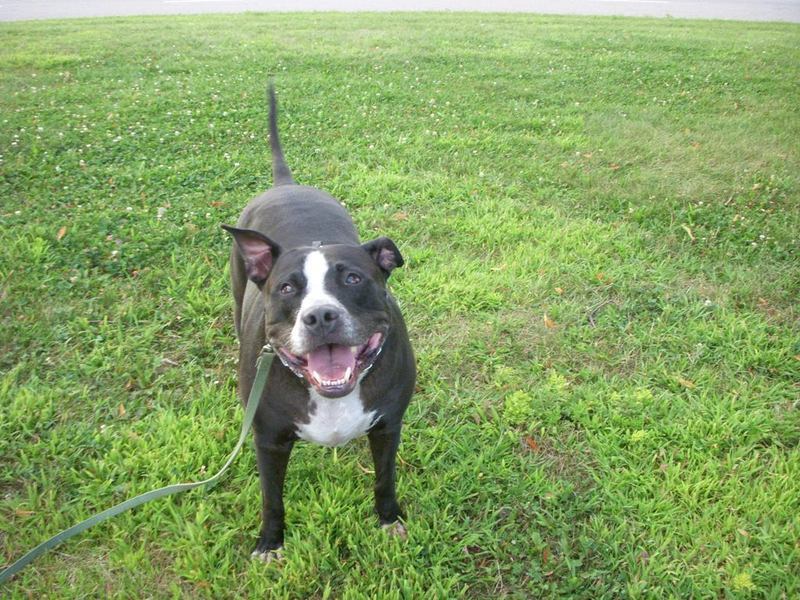 It has become apparent that I must find a bigger house with a bigger bedroom into which I can put a bigger bed, because the current situation here is working out for only one of the house's occupants. 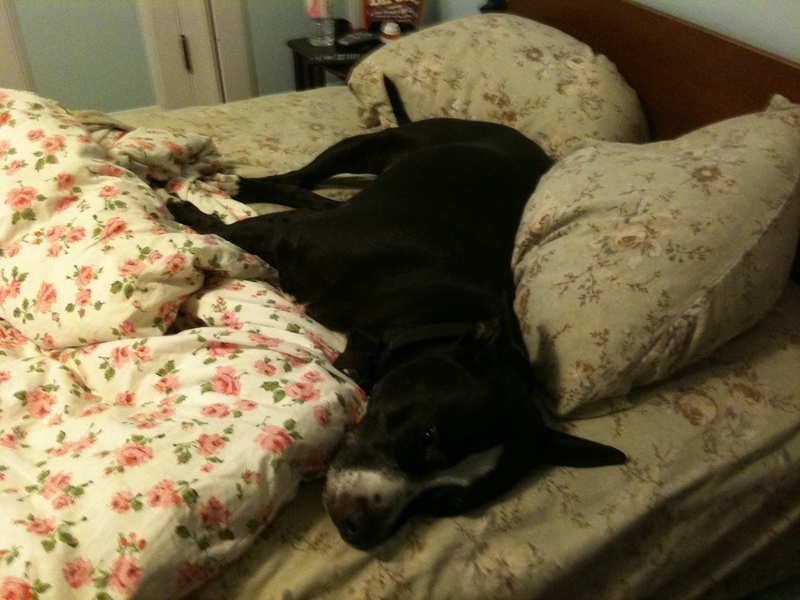 I laugh when people tell me about dogs that wake them up at 5 a.m. This is what I find every morning around quarter to 11. 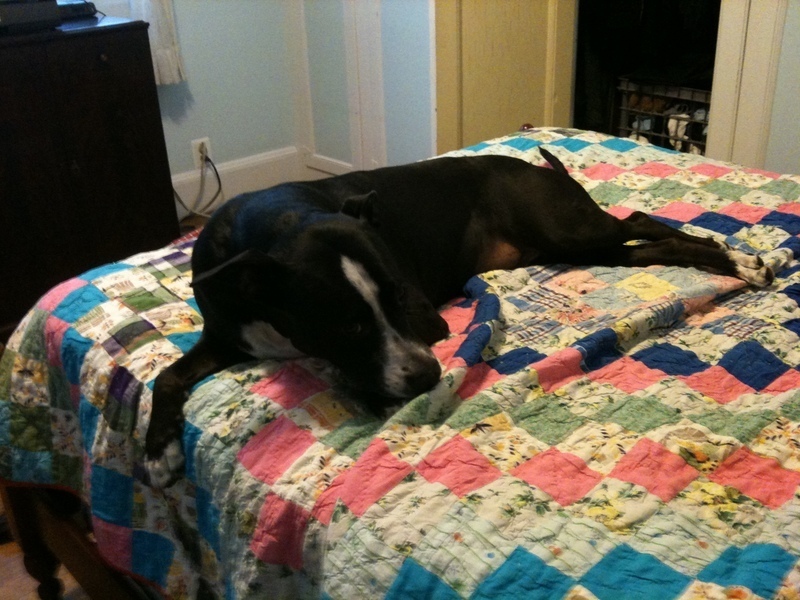 I was just ticketed for walking Charlie Ashmont in Boston without a muzzle, violating Boston's asinine Pit Bull ordinance. On the $100 citation, I am referred to as "suspect." I was standing at the corner of Dorchester Ave and Ashmont, waiting for the light to change, Charlie sitting quietly at my side. Cop said he would be taking the dog, but there was no one at Animal Control right now to come get him. Can you imagine if they took him? My poor dog with his three chronic conditions requiring 12 pills a day, who spent 5 days last month hospitalized at Angell? So, we will be driving to Milton or Quincy twice a day now to walk. And if you asked me right this minute, I’d say we might also start looking for a house outside of the city limits. How messed up would that be? I'm not exactly shy about volunteering lots of time to make Dorchester, where I was born, a better place to live. Not sure why I bother some days. He's always on leash outside and always within my control, and I’m not making him wear a muzzle.

For the record, I do not dispute that I was in violation of the current Boston Pit Bull Ordinance, and I will be paying the fine. I am merely expressing an opinion about the unfairness, vagueness and ineffectiveness of the 6-year-old ordinance. 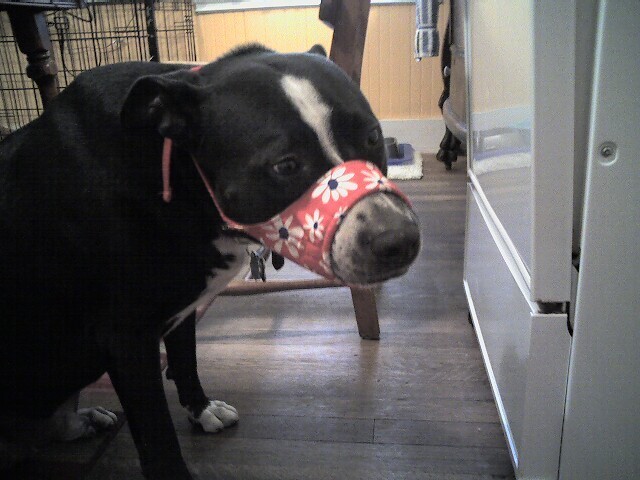 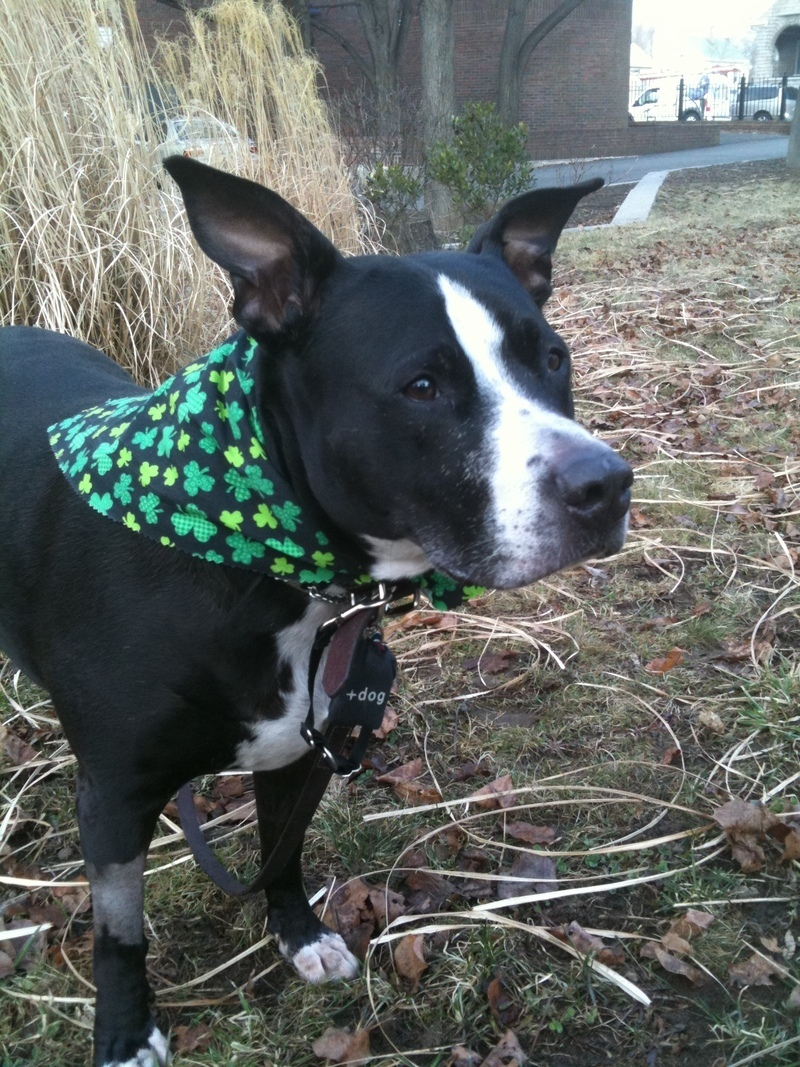 A seasonal greeting from Charlie Ashmont, who, with that neckerchief and shaved paw (and belly, which you can’t really see) looks like a refugee who should try out for House of Pain.

Charlie Ashmont spent most of the weekend in the critical care unit at Angell Memorial. He’s home now, and fine – almost his old self, though still a little drunk on pain meds. In other words, he’s even funnier than usual.

Late last week, as the weather forecasters were promising a warm and sunny weekend, Charlie and I were planning a Blue Hills hike and some other great activities. But on Friday afternoon, after a walk and a rawhide treat, Charlie started to get sick. He was pacing around the house, as he does when he doesn’t feel well. When he threw up a little, I was relieved, thinking it would make him feel better, and it seemed to. But he was still unsettled into the night, and I decided to change my plans to go out. He didn’t want to eat dinner, which is highly unusual. We spent a quiet evening, and I fell asleep, until he woke me by pacing at about midnight, and then threw up again – this time a lot. I probably should have taken him to the emergency room then, but I always struggle with the balance between crazy dog lady and calm, reasonable dog owner, and I erred on the side of the latter. I went back to sleep and woke up early as usual. Charlie was asleep, but he never gets up when I do.  A couple of hours later, when I jiggled my keys, which always works to wake him, he looked up, but didn’t stir. It was 6:30 a.m., and time to go to the emergency room. We’re lucky to have a 24 hour animal emergency room just a ten minute drive away.

He had a fever of 104, and was obviously in distress, with a swollen belly. We talked about his chronic but managed illnesses – symmetrical lupoid onychodystrophy and hypothyroidism. They admitted him, after talking to me about a bunch of things it could be, without having any idea what it could be. It’s not their fault, but I can’t even talk about how distressing it is to be asked about DNR status for your dog, who was completely himself less than 24 hours earlier. Red means no resuscitation if there’s cardiac arrest. Yellow means you can do chest compressions and intubate if indicated. Green means you can crack his chest open, because in larger dogs, it’s often difficult to do chest compressions. I chose yellow. They told me the doctor would call me after he’d had some tests, and that I could come back and visit during visiting hours from 6-7 p.m.

A doctor called just three hours after I left Charlie’s sad, confused little face being pulled into the hospital. She said they had done an x-ray or an ultrasound - I can't remember, and could see something stuck in his intestines – probably a piece of rawhide. It was making him very sick, and the danger was perforation. Her advice was to monitor closely for signs of perforation – which would make him MUCH sicker, hoping it would resolve itself. At home, I threw away all the rawhide. He has enjoyed rawhide a few times a week for the past six years, and with teeth like his, one would assume that everything gets properly chewed. However, a simple internet search on the words “rawhide,” “dogs” and “danger” reveals hundreds of hits. It’s not like I have regular access to the internet as well as an extensive education and an advanced degree, so it’s understandable that I missed this. Seriously, with all the research I’ve done about dog food, how the fuck did I miss this? Anyway, I have now thrown away a bag of rawhide chews that ended up costing me a quiet weekend and a couple thousand dollars.

I went to visit at 6 p.m. yesterday, and he was happy to see me, though he was obviously anxious. My 80-lb. dog looked so tiny in that cage, scared, with I.V. tubes stuck into his paw. The vet came in and said that his fever was gone, but his belly was still swollen, so he was still a bit uncomfortable. She wanted to monitor him overnight, and try to feed him in the morning. I brought a mat from home, and put it in his cage, because his trainer said that things that smell like home are comforting to dogs. I sat in the cage with him and he settled right down, falling asleep on my leg. When I had to leave at the end of visiting hours, he seemed too tired to really protest. The most unnerving thing about that place is the other animals crying all around.

I spent a night alone worrying in my giant house, which seems a lot less overwhelmingly huge when Charlie is here.

The doctor called early Sunday morning and said that he was much better. He ate something, and kept it down, and the swelling in his belly is gone. It would seem that he has passed whatever was in there.

I am very grateful to live close to a facility like Angell, and the care Charlie has received there over the years has been great. However, I am greatly troubled by one thing. Payment is required before the animal is treated. I do understand that they’re a business, and that their financial policies have probably been developed over the years based on past experiences. I have the money, and didn’t even hesitate to plunk down a credit card, after being given an estimate range between $1800 and $3600. (Charlie even has pet insurance, and this will no doubt be the subject of another blog post, when, if past experience is any indication, they reject most of his claim.) But what happens to people who have to make these decisions based on what they can afford? I know what kind of distress I was in, and can’t imagine how I would have felt if I couldn’t let the caregivers know that the only consideration is Charlie’s care and comfort.

About seven years ago, before I got Charlie, I was with a friend, walking his dog, when the dog had a seizure. We quickly got to Angell, thanks to a man driving by who picked us up, but it was obvious (to me, not to my friend) that the dog had brain damage and wasn’t going to make it. The admissions person at Angell told us we had to talk to the finance person before the dog could be treated. My friend, distraught, didn’t even hear what she was saying. I knew he had no money or credit, and I told him to stay with the dog, while I dealt with the paperwork. I gave them a credit card, and told them the dog could have whatever treatment her owner wanted. The dog died, and to this day, my friend doesn’t even know that I paid a $600 bill from Angell. All he knows is that everything that reasonably could have been done to help his dog was done. That’s all anyone should ever have to know.

Anyway, Charlie is home now, pushing the envelope by sleeping soundly in my spot on the couch. I’m going to let him stay there, just this once. It’s no discipline day here at Charlie’s house. Tomorrow, hopefully, things return to normal.