Why Marty? It’s a question I have fielded a LOT in the last few months. I understand that. On the surface, we may seem like rather unlikely friends. Beyond the shared background – we’re both Irish-American, Catholic school-educated and from working-class families in Dorchester – we’ve taken very different paths. But we’ve arrived at very similar places, and for some reason, my progressive bona fides are seldom questioned, while people assume that he is just another in a long line of white Irish Catholic guys from Dorchester. (I’d argue that of this particular line, he is most like Joe Moakley, but that’s another essay!) Marty and I share core values: equality, access, transparency and social justice. I believe he’s the most progressive candidate in this race, but more importantly, he is positioned to be the most effective, able to bring disparate voices to the table and convince them to work together. I’ve seen it.

Marty called the night we learned of Mayor Menino’s decision, to tell me he was running for mayor. I fully committed to him without hesitation. “Whatever you need.” We’ve known each other a long time, and we’ve worked closely together on many things, including the elections of Barack Obama, Deval Patrick, and Elizabeth Warren (we delivered 83% of the Dorchester vote under his leadership), as well as the U.S. Senate campaign of Mike Capuano, in which, for the record, we handily won Dorchester. He also asked me to help out on the first two city council campaigns for John Connolly (which I did), and introduced me to Felix Arroyo, who I have also supported in the past. I have several friends in this race, and we’re lucky to have a good field of candidates. But there is no better candidate for Mayor of Boston than Marty Walsh.

Early on, one reporter called to ask why I wasn’t waiting to see if a woman gets into the race. She was surprised when I told her that Marty has a great legislative record on women’s issues, and I had no doubt that he would continue to fight for my rights at every turn. Not all feminists are women, just like not all women are feminists. Marty is a feminist. Ask him. He’ll tell you. He’ll talk about pay equity, and a woman’s right to choose. He’ll mention buffer zones around abortion clinics, and access to birth control, a lack of sports programs for girls and how badly he wants to put an end to human trafficking. I realize that most of you don’t have my vantage point in this, and haven’t seen the way he is genuinely moved when someone is being abused or treated unfairly. But – here’s the difference – he has introduced bills in the legislature that address these things, and voted on these very issues. It’s easy to state a position; it’s harder to legislate one.

Other people asked if I was with him just because we’re friends. I told them that’s about 10% of my reasoning, but the other 90% was because of his record, and his character. I’ve seen his work in the trenches, and been on the other end of a broken lunch date because someone needed a detox bed, or a re-entry program. Marty and I have worked extensively together on issues of substance abuse, which has touched both of our families. I’d bet anything it’s touched every single one of yours as well. Marty is a person who will stop at nothing to help people in need. I have also seen him walk into a room full of my friends – super progressives – many of whom have an idea, based on his demographic, that he is a vestige of another time. They all walk away supporters, impressed by a guy with a depth and breadth of knowledge and compassion, and an openness and willingness to listen. They’re converted. This is why so many of my friends are actually working on this campaign.

Marty has it all as a candidate and a leader. Where other candidates may appear to be superficial, Marty has an impressive grasp of issues of economic development, workforce development, education and public safety, but more importantly, an understanding of the root causes of the problems that hold us back in these areas. Through this campaign, I have been continually impressed during policy discussions, when the ideas are flowing and people are excited, and Marty steps in with the concept that just crystallizes the position, and then leads us to the idea that will help solve the problem. His ability to do this is rooted in his willingness to listen to people and acknowledge different points of view. He has a great analytical mind, and a nuts-and-bolts knowledge of the way policy is moved.

I’ve never seen anyone with a greater gift for bringing disparate voices to a table, leading them to their common goals, and getting them to work together toward the solution. He has done this time and time again over an impressive career, but two instances stand out for me.

I think many of us have forgotten, now that we have led the rest of the country to see that diverse families actually STRENGTHEN our communities, what a contentious time we saw in Massachusetts when a few “family values” interests attempted to put the issue on the ballot, after the Supreme Judicial Court of Massachusetts affirmed equal marriage. It’s easy to forget. It was a long time ago. Ten years later, it’s all so normal. But then, it wasn’t, and as the Massachusetts house began to debate the issue, LGBTQ leaders on Beacon Hill went to Marty to lead their fight. They knew that having a white Irish Catholic man from Dorchester make the case would sway the votes they needed to defeat the measure. So, he acted as the Floor Whip for MassEquality during the debate. Marty didn’t hesitate when asked, despite the fact he knew there would be considerable resistance from the conservative corners of his very diverse district. Leaders of that movement continue to single him out for his assistance, and he calls it his proudest vote. From what I have seen, all but two of the 12 candidates in this race are on the right side of the equality issue, but only one has had to stand up, facing resistance from his base, and vote on it.

The second thing everyone needs to know about Marty is that he started a program called Building Pathways. When he became the head of the Building Trades a few years ago, he looked out over a room of white men, and realized the trades needed to diversify. He conceived this first-of-its-kind pre-apprenticeship program that guarantees union placement and well-paying jobs to underserved communities, mostly people of color and women. There are many apprenticeship programs, but this is the only one that guarantees placement, and it has become a national model. There was resistance from the trades, but Marty persevered, and now they compete for the graduates. There has been a lot of talk about Building Pathways on the campaign trail, because the idea of offering opportunity to people appeals to many. I’ve really enjoyed meeting the graduates of this program. They are impressive people who have so much to offer the world, and this opportunity Marty created and they pursued will allow them to do this. That’s good for our City. The piece of this I really like though comes from a different perspective; a program like this actually strengthens the unions. As populations change, unions must change to stay relevant. This relates to reframing the conversation around Labor, and communicating its importance as an economic driver in Boston and around the country. As the income gap grows larger, and the very existence of the middle class is threatened, we need to organize more than ever. We won’t be able to do that until some of the unions themselves evolve, and I see Building Pathways as a piece of this evolution.

In his 17 year career on Beacon Hill, and as a community activist before that, he has accomplished great things. Dorchester is a MUCH better place for his service. When I talk to someone from our neighborhood who is supporting someone else, I point to the Red Line stations that spurred so much development here; Pope John Paul II Park and the Neponset Trail; Carney Hospital, still open despite MANY attempts to close it; all of the sports and arts and social programs he has championed. The list goes on and on. Thankfully, most of them get it.

Marty Walsh is my friend, and he is my candidate for Mayor. I say this loudly, unequivocally and without reservation. What I can also say without equivocation is that he is the best candidate in this race. I am asking you personally to cast your vote for him on Tuesday. I promise that if you think you share my values, it's a vote you'll never regret. 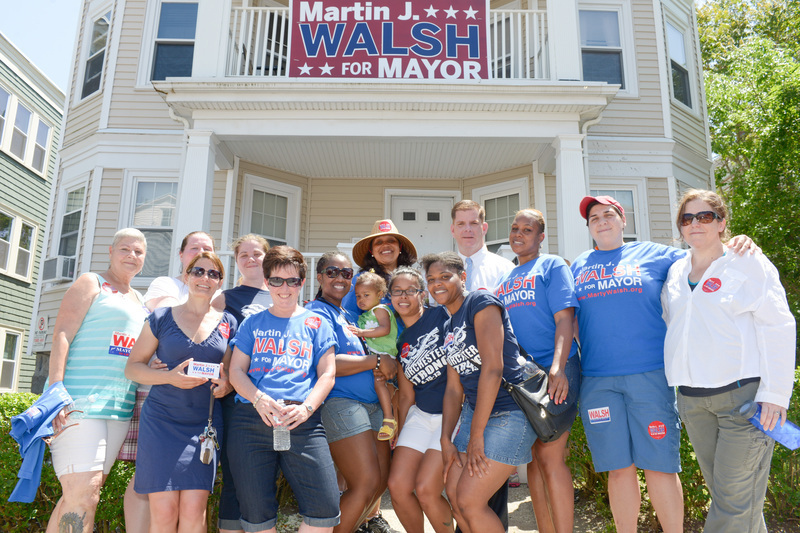