One year ago today, I left my job at City Hall after seven long years that flew by. As I have said 1000 times, to anyone who has asked, I don’t think I realized how spent I was until I walked out the door. That last year there was brutal. The air was thick and the gravity was real. They were always big jobs for all of us, but in that final year, people were dying and starving and being evicted. Businesses were failing, and the city was an eerie reflection of its former vibrant self. I lost family and friends to the virus, and there were no funerals, no chance to say goodbye. My house abuts the cemetery, and when I was home, the earth movers were my incessant soundtrack, seven days a week. It was sobering and frightening. I remember sitting here and listening, wondering if this was it. In some ways, we still don’t know. But I am proud of the work we did. We tried hard to do everything we could to ease the burden of the living and the grieving, the scared and the angry. People really stepped up. Leaders were born. Fissures were revealed. Voices rose up. We all rowed together for a while, until we didn’t.

This last year has been great. I have been lucky to have plenty of projects and work, but more importantly, I have had time. I’ve been taking long walks with my beloved (dog), reading fiction, listening to records, not working at all on Saturdays, and cooking Sunday supper every week with my “family.” I’ve never cooked before in my life. Tomorrow is corned beef and cabbage, naturally. I started a daily Substack, with which I am having lots of fun. It’s basically a way for me to listen to records with friends without having to hold them hostage in my living room as they politely play along. Some people who indulge me tell me it’s the first thing they read every morning, and a handful have said they read it BEFORE they Wordle (™ New York Times), which I consider the highest honor imaginable.

Soon after I left City Hall last year, I co-wrote an op-ed with my friend Damon, which was published in the Globe. I didn’t have to run it through five levels of defanging and approvals before submitting it. I have my own voice again. That’s not a complaint about my time at City Hall. It’s just a fact. When you work or are perceived to work so close to a public figure, everything you say is scrutinzed for hidden messages. I was talking to him not too long ago, and he was describing his strange experience of being assigned the task of promoting someone else’s agenda. It’s a good agenda – really a great, transformational agenda, but it’s someone else’s. I said “Dude! I mean Secretary! Welcome to my world from 2014 to 2021!” It was a good laugh.

In the last year, I’ve hosted amazing book talks on Zoom – awkward in execution but rich in ideas and more importantly, in community. Through this worldwide plague, with its curves and waves, I have been grateful for the opportunity to connect and re-connect with people, even if they’re just in tiny boxes. I have been working with Joe Pernice, with whom I own a record label, on reissuing some of his music on vinyl. And he has two and a half new albums in the can. He has never, in the 25+ years I’ve known him, been so prolific, or so good. Our 20-year side hustle is flourishing and threatening to consume a bit more of my time.

I raised a bunch of money for Interim House, the place my mother founded fifty years ago to help people struggling with addiction. I’ve talked to people about jobs, turned down jobs, helped lots people look for jobs, and rejoiced at seeing where some of my favorite people landed post-City Hall. The idea of getting on the hamster wheel ever again hurts my head. I keep walking by my closet full of work clothes and work shoes thinking “I should get rid of those,” because my monkey suit days are surely over. I spontaneously developed an allergy to eye makeup. I told my dermatologist, and she said she had a cure. I was excited to hear it. She said “Don’t wear eye makeup.” Funny lady. I’d burn my panty hose, but you never know when you’ll have to get dressed for a funeral, so that seems shortsighted. I might do it anyway.

I’ve been cleaning out my house, finding things I didn’t know I had when I bought another one of the same thing. Others who could work from home went through this a year earlier, but I was going to work every day then, so I am behind. Related, if you need two dozen hand towels, a few blankets, vegetable peelers or a flat-packed coffee table, I know where you can find them.

I’ve been rooting for the people now at City Hall. Of course I am rooting for my former colleagues – I adore them -- but also for the new people. The first year is overwhelming, even bewildering. I am laughing a little as policies that we worked on for years are rolled out as if new. To be sure, we did it too, with work that was underway in the administration before ours. It’s what you do, because politics. There’s a book in that for sure. The problem with government is politics. And I am not ashamed to admit that I am a little bit jealous, because of the money now growing on trees. Big ideas are expensive, and money is newly abundant. That would be fun. Very recently, I have been exploring Ukrainian music, and buying it on Bandcamp, because that puts money directly into the bank accounts of the artists.

Looking forward, I have ideas. Big ideas. Some I can talk about; some call for more discretion. Maybe if I write some of them down, someone will shame me into executing, or better yet, someone will appropriate. For instance, we need to open a facility that presses vinyl. Right now, it can take a year or more to get a record pressed, because the big labels, who once owned the means of production, divested from all of that when they made us buy our record collections all over again on CD. Well, now they are back at it, knocking the little guys off the production line. So we need to start a plant for the little guy. It should be a social enterprise, or maybe a co-op, and it should employ people coming back from incarceration, and pay them a living wage with benefits. I've done some research. It’s doable, and it doesn’t have to be me. I’m happy to help someone else think through it.

There also needs to be a Super Political Action Committee (Super PAC) for arts and culture. Or someone should start some kind of Dark Money entity, perhaps called Dark Arts Money, or something better. Our system is lousy with these shadow organizations, and until the game changes, that’s the game. It should work to elect candidates who will do the things we all know need to be done, and defeat those who won’t. I don’t know about you, but I am tired of turning up hat in hand to explain the economics case or the moral case for arts and culture. It doesn’t seem to be working and all this nibbling around the edges has left a lot of people hungry. Again it’s doable, and it doesn’t have to be me. I’m happy to help someone else think through it.

“When are you going to write a book?” is a question that everyone asks everyone else all the time. And I think everyone thinks they CAN write a book. I’m not sure that’s true. I haven’t started writing the book everyone keeps asking me about, mostly because I don’t remember a lot of things. But I’ve been thinking and scribbling, because even though I don’t remember, I can spin a yarn with the best of them. Remember that obituary that went viral a few months ago? “Because she was my mother, the death of zaftig good-time gal Renay Corren at the impossible old age of 84 is newsworthy to me, and I treat it with the same respect and reverence she had for, well, nothing.” Its truth and beauty made me cry, and got me thinking that I should write obituaries for myself and my closest comrades who are not yet dead. It would eschew the accolades and celebrate the essence. It would be called Nearly Departed. Here’s an excerpt from mine.

Joyce Linehan (she/her/hers) reads a lot of books, but while reading a book, she finds it difficult to concentrate sometimes, because she is always thinking about the NEXT book she will read instead of thinking about the book she is reading. This impulse was exacerbated when she read that the average avid reader gets to read 2500 books in her life, which seems to her like a very small number. Along these lines, she once had a boyfriend who drove her crazy because he took too long to fix his coffee at the Starbucks. He would add cream and sugar and stir and stir and stir, taste, add more, stir and stir and stir, while she added cream, replaced the cover, and walked, understanding that the coffee would stir itself as she moved. It goes without saying that they broke up. For Joyce, it’s definitely not about the destination, and it’s certainly not about the journey; it’s about the NEXT journey, and the journey after that one. 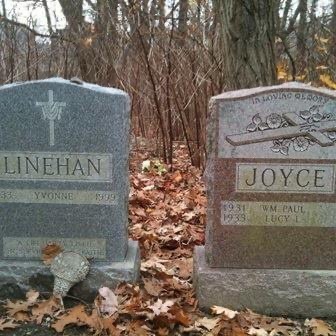